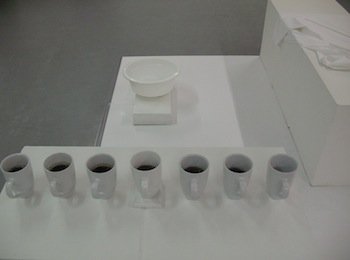 RIMA is an installation work that combines technology, creative fiction and endurance performance. Conceptually driven by an interest in the incremental shifts within a confined space, RIMA poetically re-frames the facts behind the effects of solitary confinement and isolation into a fictional present/future narrative.

The text projection and twitter feed, is prompted by audience movement and environmental changes triggered by sensors in the installed space. The subsequent data is used to select and output related text libraries. These are projected on the floor of one of the adjacent cells to the gallery, streamed live on twitter (twitter fiction) and a designated webpage. The twitter feed mimics real time thoughts, responses and actions, which over time slowly build into a fictional narrative somewhere between an indistinct present and a parallel sci-fi future. 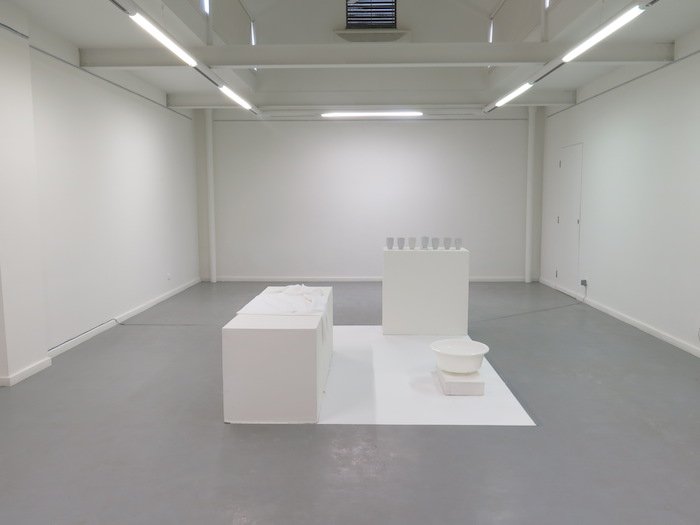 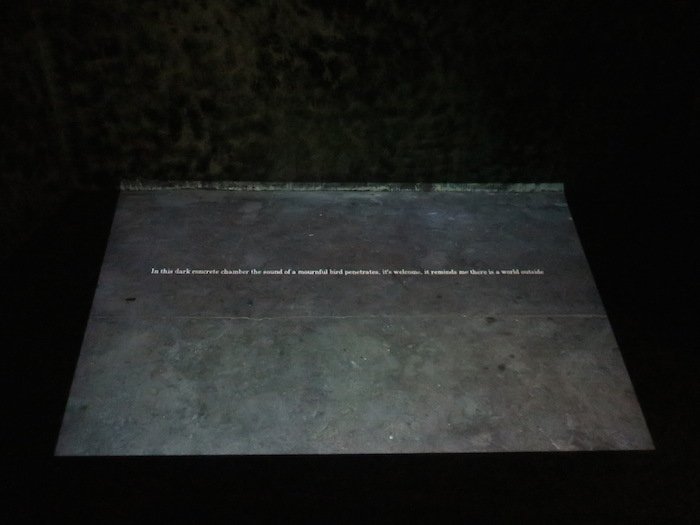 Augmenting the installation, Vulcan will undertake a number of durational performances within different spaces in the Lock-Up, accompanied by Scott’s soundscapes. Responding to details from her research into solitary, the actions make explicit, strategies for survival within an interminable passing of time. 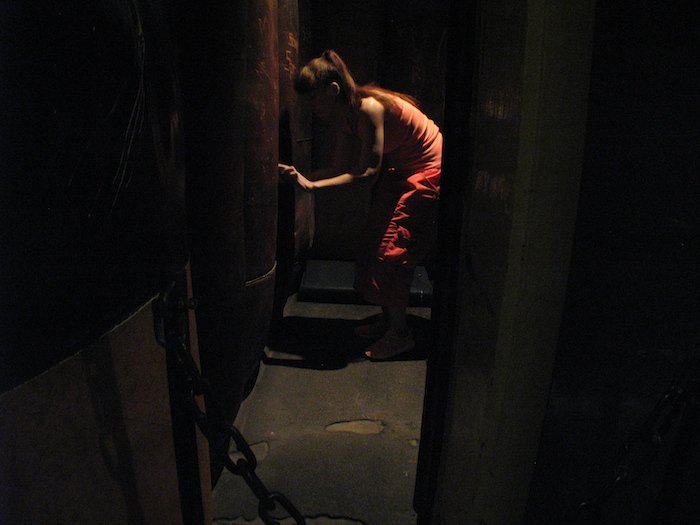 We started thinking about this work three years ago. At that time we were drawn to the incremental details in daily life, the tiny shifts between this moment and the next, and the relationship to associative memory. Very early on, the idea of a sensor driven space, reading data (light, temperature fluctuations, sound, proximity) and in turn triggering some sort of text, like a diary, was a formal structure in place. We imagined a prisoner of conscience or a hermit and their relationship to their diminished world. How tiny shifts within time and space might trigger their own set of personal memory associations and how these might differ from what presently existed outside their world.

During our residency at the Lock-Up in 2013 and in response to readings on Solitary Confinement, Julie spent a day in one of the cells with water only and one meal. This tiny glimpse into the reality of what solitary actually means became a driving force shaping the research and the resultant creative writing that is now the ‘Twitter Fiction’ within the work.

It is well documented that healthy subjects spending just 48 hours in sensory deprivation can experience severe anxiety, extreme emotion, paranoia and hallucinations. In addition side effects on brain function impair the capacity to remember and associate by up to 35%. Even if we like to spend time alone we are ultimately social animals and solitary is one way of breaking the fabric of what it means to be human. The most heartbreaking accounts of time in solitary, abject conditions aside, recall the deep craving for human touch.

Three years on and the somewhat romantic notions of our prisoner’s diary have been shifted by a harsher more pervasive reality. The text now speaks to this and in addition blurs a futuristic narrative, offering a parallel world. The stark white gallery installation stands testimony to the whitewashing governments are complicit in when buying into this out-of-sight out-of-mind system, regarded by human rights advocates the world over as torture and a human rights violation.

“Words take time. They can’t tell it all at once. How can this anxiety be expressed? I would need a single word. A word that creates a synthesis. A crushing blow of a word. A thunderclap word. A blood-soaked word. Shrieked from a throat choking with anxiety. The waiting in the hollow of my stomach. My heart squeezed by horror. The dread that tugs in my chest, high up, a place, a point on the left, where usually there is nothing. My heart. A flesh word. A blood word. This word does not exist.” 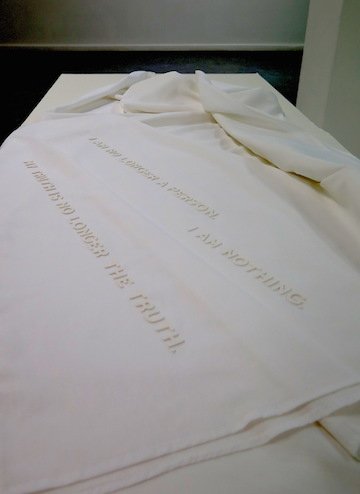